The Olympic loop had its world premiere at the 1989 Oktoberfest in Munich. The maximum speed is 100 km/h and is controlled and electronically controlled by 2 elevators. The block system is doubly secured and has an occupancy and release circuit that simultaneously controls the two elevators. The train can be driven with 20 to 28 people per train. The braking system is fully automatic, even in the event of a power failure. 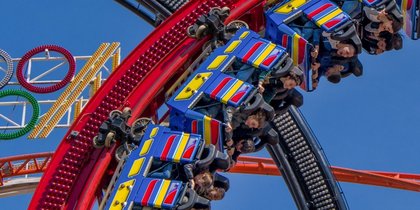