From now on you can visit the "Kingdom of the Railways" in the Vienna Prater. The largest interactive railway model world in Austria shows all of Vienna in miniature format.

With a planned area of 1.000 square meters, the model railway system is to be the largest in Austria and the second largest in the world. In the next few years it will be expanded to include all other federal states, including their famous landmarks and landscapes.

In order to use the free space for other purposes until then, visitors can hold races with remote-controlled model cars or operate small construction vehicles via a remote control. In other areas of the exhibition, the youngest can be photographed as conductors or train drivers and in the children's area they can discover other railway worlds with wooden toys. 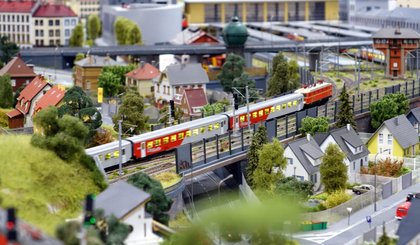 Family tour with kids between 10 and 14 years of age

Family tour with kids between 6 and 10 years of age

For those young at heart