With the reopening in 2021, the "Luftburg - Kolarik im Prater" restaurant is the largest fully certified organic restaurant in the world.

From the legendary cured pork knuckle to juicy ribs to vegetarian and vegan dishes, you can enjoy 100% organic quality here. The Fohrenburger Hofbier, brewed especially for the Luftburg, is available from the Fohrenburg brewery.

Both the completely redesigned, light-flooded glass palace and the spacious guest garden with its plane trees invite you to linger. For children there is the “Gute Kinderstube” indoors and the Luftburg adventure world outdoors to let off steam.

The historical roots of the Luftburg go back to the 19th century. In 1895, the brothers Ferdinand and Wilhelm Leicht acquired what was then the restaurant "Zum Schwarzen Tor" and redesigned it as a summer variety show. Soon after, it was established as a popular attraction in the Vienna Prater, and enthusiastic personalities such as Raoul Aslan, Hans Moser, Girardi and Paula Wessely enthralled the Viennese The audience under the still magnificent chestnut trees.After the strikingly beautiful building with its yellow-green wooden elements was destroyed during the war, it became the property of the Kolarik family.First a petting zoo was created on the property with attractions such as the smallest cow in Austria, an unusual red sow, a tamed brown bear to a tiger lady and a lion. 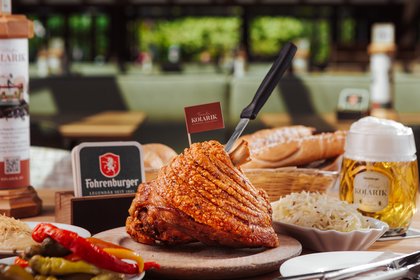 In 1992, Elisabeth Kolarik opened the "Luftburg" café-restaurant in order to offer the Viennese another meeting place for cozy get-togethers and culinary delights. In 2020, son Paul and his wife Bianca took over the management of the Luftburg - Kolarik restaurant in the Prater and designed the restaurant not only completely rebuilt, but also made it the largest fully certified organic restaurant in the world.