Pure nostalgia! An almost forgotten fun swing is now back to the Prater. Old memories are brought back when kids and adults are having fun in the Assault Boat - like they did back then.

The re-building of the "Vienna Assault Boat from 1907" has brought back a wonderful piece of nostalgia to its original place. Already at the beginning of the 20th century, this swing has fascinated and enthused young and old. The electrically driven double swing was modeled on historic steamboats in terms of construction and looks, and also the characteristic steam engine still looks the way it did before, snuffling and steaming.

Invented in England towards the end of the 19th century the Assault Boat was considered the first thrill ride and enthused visitors from one fun fair to the next. There are only three machines of this kind worldwide. Therefore, it was all the more important to recover this unique piece and to give it back its original place. 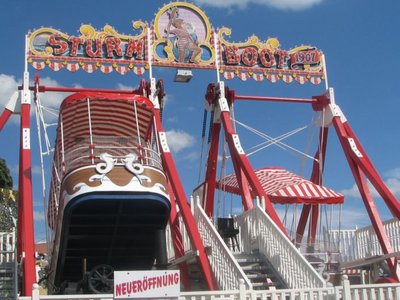 Prater Tip: The movie "The Third Man" has contributed to the then "Vienna Steam Yacht's" becoming popular.