The "Airmaxx" is a "Swinger" type ride from the Dutch manufacturer Mondial and has been in Vienna's Prater since March 2019.

The carousel consists of 4 arms, each with a gondola that can seat up to 10 people. The arms are attached to the mast of the central structure via a roof construction. During the ride, the revolving body rotates, whereby the individual arms of the swinger are carried outwards by centrifugal force - similar to a chain carousel.

They reach an angle of up to 75 degrees! In addition, the gondolas rotate. And last but not least, a really special driving element provides a lot of variety: the arms swinging outwards can be pulled inwards hydraulically! The alternating drawing in and swinging out of the arms gives the "swinger" its name. A ride that is not only visually impressive! 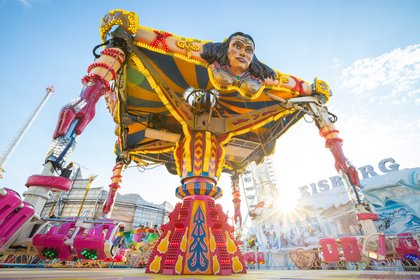 This thrill ride was built in 1999 and traveled in Austria until 2004 under the Rieger company. Since then, the Airmaxx has been in storage - to the surprise of many fair fans, the system was rebuilt in 2019 in Vienna's Prater.