The mysterious island "Skull Rock" is hidden somewhere in the fog in the expanse of the Prater Ocean. The world's most dangerous pirates tell of the curse that lies on the place and can not quite hide their fear.

No one knows exactly what the old pirate captain did to find the treasure, but it cursed him and his crew for all time. If you challenge your destiny and find "Skull Rock," the mysterious wreck on the beach will show you the way.

Who knows, maybe you can manage it unscathed by the adventurous caves, the tropical jungle paths and dark dungeon dungeons and you will succeed in finding in the dark remnants of the ship what the old pirate captain has never found!

But be warned, weird creatures could be waiting for you! 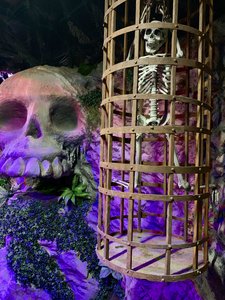 An absolute highlight awaits the Prater visitors since August 2019! The detailed, lovingly designed train with countless special effects will not be forgotten soon!

The Fun of Creeps